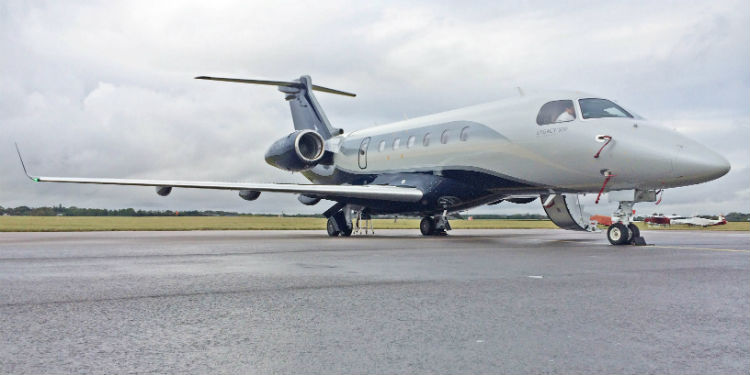 Embraer’s Legacy 500 is the company’s first foray into the mid-size jet category and fuses excellent short field capabilities with the largest cabin size in its class. But in a crowded sector, will it have enough of an advantage over the competition?


Short field performance is the Legacy 500’s main benefit. The Legacy 500 needs much less runway than its competitors, not only to land, but also to take off on as well.

The mid-size and super mid-size markets are crowded and buyers have choices galore. Bombardier’s suspension of the LearJet 85 due to weak market demand shows that the Legacy 500 is going to find it tough going.

Embraer first spoke about the Legacy 500 at NBAA 2007 show, where it unveiled its concepts for aircraft that it called the MSJ (mid-size jet) and MLJ (mid-light jet).

The MSJ and MLJ concepts that Embraer presented were clean sheet designs that would share a 6 ft stand up fuselage cross section, have the same Honeywell HTF7500E engines, the same Rockwell Collins Pro Line Fusion avionics and, for the first time in an Embraer aircraft, both aircraft would use fly-by-wire control systems.

Rather than keeping in-line with the Phenom family name, Embraer decided to associate the new aircraft with the Legacy family, giving the aircraft the more prestige feel of the larger aircraft than the smaller Phenom’s.

The newly-named Legacy 500 was due to enter service in 2012, but Embraer hit a snag with the software that controlled the aircraft’s fly-by-wire systems, causing Embraer to push back the programme by a year.

A further delay was announced later, although Embraer did not cite any particular reason, and the aircraft finally saw its entry into service mid-way through 2014 – two years late.

The Legacy 500 that Embraer delivered is a twin-engine private jet that can carry 12 passengers, although eight is a more typical configuration.

With eight passengers on board, the Legacy 500 can fly a maximum of 3,400 nautical miles (6,297 km), which is enough to get you from London to Dubai, Beijing to Mumbai, Los Angeles to Honolulu, or Moscow to Casablanca.

Landing on short fields is the Legacy 500’s speciality, with the 2,122 ft (647 m) needed to land being significantly less than some of its competition. This means that the aircraft can land at more airports than some of the other aircraft in its class, which could be a deciding factor for some buyers.


With a 6 ft stand-up cabin and a 6 ft 10 in fuselage cross section, the cabin of the Legacy 500 feels spacious, especially when compared to other aircraft in its class.

The standard configuration for the aircraft sees seating for up to eight passengers, although the aircraft can be fitted with seating for 12 through the introduction of two three-piece divans at the rear of the cabin.

In the eight-seat configuration, the aircraft features the only wet galley (with a water supply) in its weight class.

Entertainment is taken care of thanks to the Honeywell Ovation Select Cabin Management System, which includes Wi-Fi connectivity.

The original cabin design that Embraer presented was a concept designed by BMW DesignWorks USA. However, the company later admitted that while the designs looked great, they were less than practical.


Owning an aircraft is always a risk, more so when it is a new aircraft type using technologies that the airframer has never used before. But Embraer has a strong heritage, having built smaller aircraft, as well as larger airliner types.

The mid-size sector that it competes in, however, is a little bit of a worry, with pre-owned prices reflecting the amount of aircraft on the market. Although it is difficult to pitch the Legacy 500 directly against a current in production model to see how the pre-owned prices hold up, it is fair to say that the depreciation curve of the aircraft will closely map that of the sector as a whole.

Embraer made a reported $750 million investment into both the Legacy 450 and Legacy 500 and should the market recover, it is difficult to see how the company won’t be paid back for their investment.