Its speed and efficiency alongside its ability to utilise small airfields are the real selling points of the G280.

Longer missions will require a fuel stop, especially if the aircraft is heavily loaded.

The key to the G280’s capabilities is the aircraft’s new wing design, as well as the two Honeywell HTF7250G engines that make the aircraft one of the fastest in the market. The G280 is so fast that it holds over 75 city-pair speed records including Guernsey to Teterboro (7 hours and 26 minutes).

As well as increasing cruise speed, Gulfstream claims the new wing design reduces fuel burn by as much as 12% compared to unnamed competitors, whilst also reducing take-off distance needed – making airports with shorter runways available to passengers. The G280 also has approval for steep approaches – allowing the aircraft to land at airports such as London City. Being able to utilise smaller airports as well as fly across the Atlantic makes the G280 a very versatile aircraft.

Autobrakes and auto-throttles feature in the cockpit, alongside the Planeview 280 flight deck – providing advanced weather, navigation and approach graphics to increase safety. The autobrakes aid smoother and safer landings whilst also reducing brake wear – reducing maintenance costs. An enhanced vision system is an optional extra that can be added to further increase safety.

A cabin height of 6ft 3in and width of 7ft 2in allows plenty of cabin room for up to 10 passengers. The cabin can be configured into four floor plans that include sofas, wide chairs, a forward galley and an aft lavatory. The G280 also has the ability to sleep up to five passengers.

The cabin is one of the quietest of any corporate jet thanks to acoustic engineers from Electric Boat (another General Dynamic company which specialises in submarines) working to minimise cabin noise. A 100% fresh-air replenishment system also enhances passenger comfort. 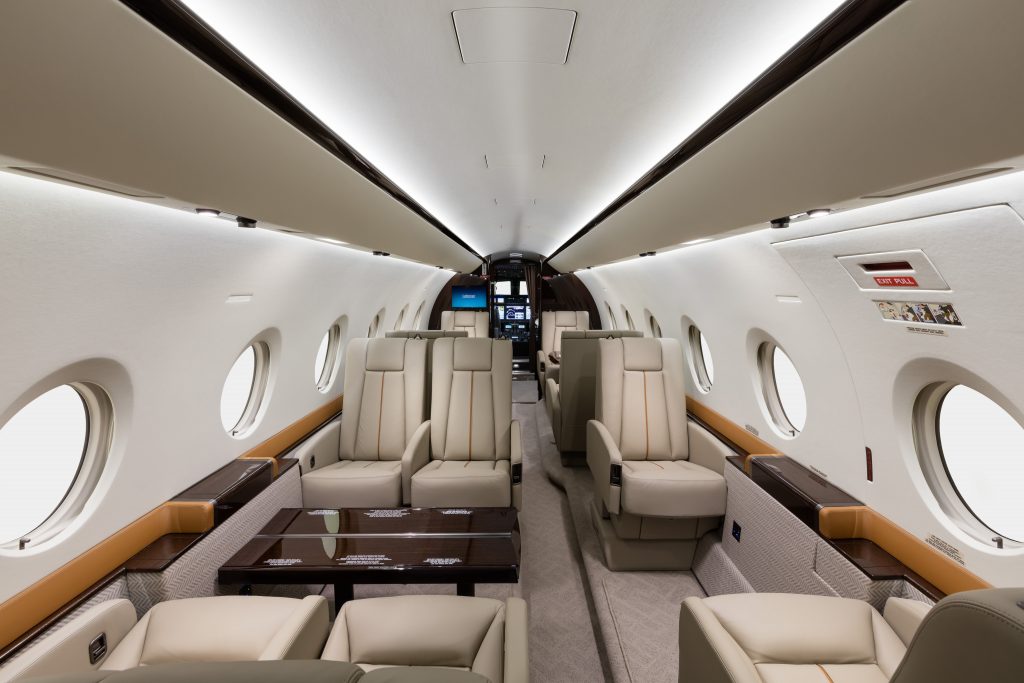 The G280 features a modern and spacious cabin. (Photo: Gulfstream)

In-flight entertainment and cabin management systems are controlled through an integrated iPod or through a smartphone application for personal devices. This can control the temperature, cabin lighting as well as the entertainment on the two Blu-ray DVD players and HD screens.

The 120 cu. ft. baggage compartment can carry around 40 suitcases, which can be accessed inflight.

List price for a new G280 is $24.5 million – placing it within the middle of the super mid-size market in terms of list price. It is a slightly less expensive option compared to the Legacy 650 and Challenger 650, but Citation models such as the Longitude, Citation X+ are slightly cheaper. Of course, it is important to remember that nobody pays list price for a new aircraft.

AMSTAT data shows that just two aircraft were for sale in April 2018, representing just 1.47% of the global fleet. This shows the G280 is a popular aircraft which is keeping residuals relatively high.

Fixed costs that include hangar space, insurance, crew salaries and training will cost $450,642 a year, on average.