A great cabin that is quiet and comfortable, with relatively low operating costs.

The Longitude is not the fastest super-midsize aircraft, and some competitors have a greater range.

Originally announced in 2012 and updated in 2014, the Citation Longitude is set to shake up the crowded super-midsize market. The Longitude is a clean-sheet design (although elements were taken from the Hawker 4000 and Citation Latitude), and was set to enter the market in early 2018. As Cessna’s second largest aircraft, the Longitude is aimed to compete with the Legacy 500 and the Challenger 350.

The Longitude will deliver a large and spacious cabin with a customisable flat-floor cabin. The standard cabin features a double-club configuration – with the option to install a couch in the aft of the cabin. There is also the option to add a side-facing seat in the cabin, however this reduces the size of the galley. The cabin can also be customised with six different cabin themes, using a variety of high quality materials. The cabin environment is fully controllable using an App. The window blinds, temperature controls and lighting for the entire cabin can be controlled at a touch of a button.

The cabin features a fully accessible walk-in baggage compartment and a wet galley with a fridge, a microwave oven and an all-important coffee machine. Internet connectivity and a cabin management system are also featured on the Longitude.

The Longitude’s cabin is also remarkably quiet. This creates a much calmer and more comfortable ride for passengers ,and that can makes a significant difference during longer journeys. 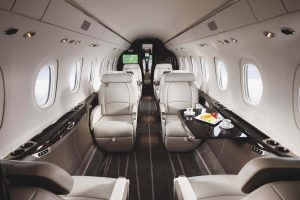 With the second-longest range of any Citation, the Longitude is able to fly 4027mi/6482km/3500nm with four passengers on board. This range allows the passengers to fly transatlantic routes such as New York to London without the need to refuel.

The cabin altitude in the Longitude is just 5,950ft whilst flying at its maximum ceiling. A low cabin pressure reduces the impact of jetlag and keeps passengers feeling refreshed. Cessna also claims that the Longitude has the quietest cabin within the super-midsize market, making travelling a more enjoyable experience.

A full fuel payload of 725kg/1,600lb allows for plenty of luggage to be carried.

In the cockpit, the Longitude features Garmin G5000 avionics with a Heads-Up Display (HUD) and an embedded display system (EDS). The G5000 also includes synthetic vision technology, as well as other features aimed at aiding pilot intuition.

Corporate jets are not cheap – however the Longitude is competitively priced within the super-midsize market. A list price of $24million for a new aircraft makes the Longitude comparable in price with the Challenger 350 and G280.

This is aided by the utilisation of the LinxUs diagnostics system in order to monitor the aircraft 100% of the time and provide real-time diagnostics. This minimises time needed to find the fault – allowing the aircraft to return to the air more quickly.

Although there is no specific operating cost data as of yet, the Honeywell engines are designed to have a low fuel flow, with Cessna claiming a direct operating cost of under $2000 an hour. An effective aerodynamic design also helps the Longitude to reduce fuel burn and operating costs. This makes the cost proposition for the Longitude one of the best in the super-midsize market.

Certification of the Longitude is expected imminently. As such, customer aircraft are expected to start being delivered in mid 2018.

At EBACE 2017, Cessna announced that Travel Service, a Czech Republic airline, would be the Longitude’s first European customer – using the Longitude for charter services.