The Elite upgrades the already impressive HondaJet – giving it more range, better fuel efficiency and a cabin with more features and amenities.

Some like its looks – others don’t. The wing-mounted engines split opinions but it certainly stands out on the ramp.

Honda released the HondaJet Elite – an upgrade of its first business aircraft – at EBACE 2018. Current customers have influenced the changes the Elite brings, with a range increase being the headline feature of the new variant.

Already one of the most-intriguing and best-performing very light jets available, the Elite has improved on an already highly capable and popular aircraft.

The most impressive upgrade comes with the aircraft’s range. Extended range comes thanks to auxiliary fuel tanks, a lighter cabin and more defined aerodynamics – allowing the Elite to fly 1,437nm – 17% (208nm) further than the standard HondaJet. Extending the range has helped to solidify the HondaJet has one of the best-performing aircraft in the very light jet sector. Passengers are able to fly from New York to Houston, London to Istanbul or Tokyo to Guam.

Honda claims the over-the-wing engine mounts are around 20% more aerodynamically efficient than traditional fuselage-mounted engines – further improving fuel efficiency. Honda claims that the Elite is the most fuel-efficient aircraft in its segment.

The Elite features the same 5ft wide and 4ft 8in high fuselage as the original HondaJet. But it is the inside of the cabin where the Elite sees significant improvements over the original HA-420.

The Elite now also comes with the option for a fully enclosed belted lavatory – a significant comfort feature that most light jets do not have. This also allows the aircraft to retain capacity for seven passengers alongside a galley that comes standard with a coffee brewer. 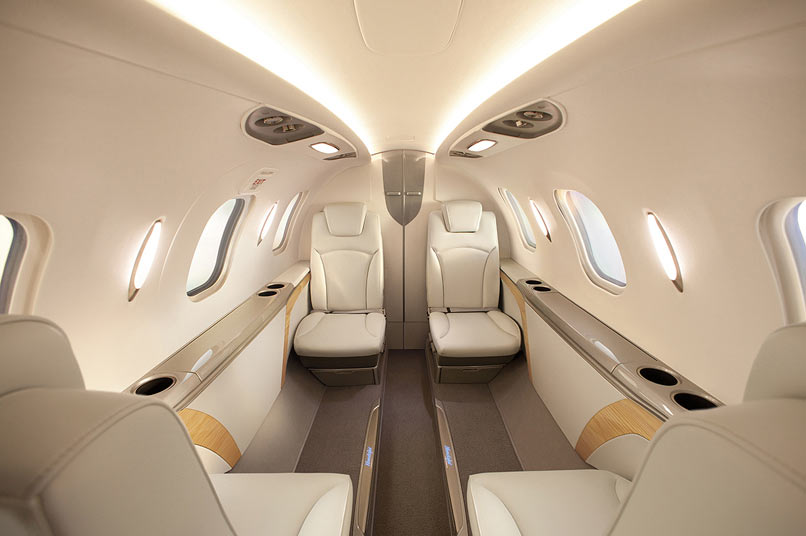 Interior of the HondaJet (Photo: Honda)

A maximum cabin altitude of 8,000ft – even when at maximum flight level of 43,000ft – allows passengers to feel less jetlagged and more refreshed after the flight.

The cabin audio system is also more impressive in the Elite, thanks to the speakerless Bongiovi Aviation system. Instead of using a traditional speaker setup, the Bongiovi system effectively makes the interior panels the speakers thanks to 24 transducers placed behind cabin systems. This creates a more immersive sound for passengers whilst also blocking any exterior noise.

The cabin is not the only place where the Elite has seen noise modifications. The engine-inlet manifolds have been redesigned to include perforated-inlet technology – a combination of newly shaped fanblades and honeycomb inlets that reduces external noise reaching the cabin making the cabin a more conducive working environment.

In the cockpit, the Garmin 3000 based avionics have seen a variety of improvements. A new angle-of-attack indicator and performance-management system and automatic takeoff and landing distance (TO/LD) management system together make for improved pilot situational awareness and reduced flight-planning time. This makes the HondaJet Elite even easier and safer for single pilot operations – and not having the need for a second pilot makes it cheaper to operate too.

List price for a HondaJet Elite is $5.25 million – around $300,000 more expensive than a standard HondaJet. The Elite variant will soon be Honda’s standard offering of the aircraft.

“We are evaluating what is the best business case for us as well as for our customers. But, of course, some of the functionality should be available for our current customers, so we are now looking at what package could be the most desirable from the customer’s standpoint.” – Michimasa Fujino, CEO Honda Jet.

Finance for smaller aircraft is hard to come by, but Honda Financial Services – a subsidiary of American Honda Motor Co. – provides financing and account servicing for HondaJet customers in the US (Honda is still looking at expanding this service to other countries). This makes it easier for potential owners to get into a light jet and provide more financial flexibility compared to buying other light jets.

Operating costs for the Elite are currently unpublished, but are expected to be lower than those of the current HondaJet. Tweaked aerodynamics and less weight both help increase fuel efficiency – equating to significant fuel savings.