Flairjet will make Phenom 100 available for private charter from Oxford. 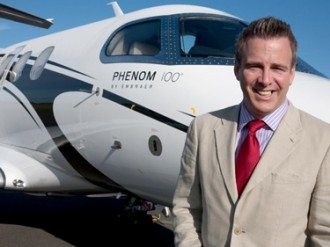 FlairJet is adding a second Embraer Phenom 100 business jet to its managed fleet, which builds upon the company’s long-standing relationship with the jet.

The UK-registered aircraft (G-ITSU) is configured in a four-seat club arrangement and Flairjet will be offer the jet for third party charter from its base at London Oxford Airport. It is a pre-owned aircraft and was previously registered in Austria.

Flairjet, led by David Fletcher, operated the first ever Phenom 100 and 300 aircraft in Europe and remains the only commercial operator of both types.

It was only since Marshall Aerospace’s buyout of the company in March 2013 that Flairjet was able to expand its aircraft portfolio beyond the Phenom to include a Cessna XLS and Citation Bravo based at Cambridge Airport.

The company also manages another privately-owned Phenom 100 (G-LGMG) from Bari in Italy.

Following its acquisition this year, FlairJet absorbed the operations of Marshall Executive Aviation under one air operating certificate in June. The management teams have since been merged with an operations base at Oxford and administration and accounts at Cambridge.

Speaking in March, Fletcher said that “adding a Challenger 604 or 605 would be the next logical step” for the company, but this has not yet appeared to happen.

Fletcher also delivered the 400th Phenom aircraft in July, flying a Phenom 300 business jet from Embraer’s Brazilian Sao Jose dos Campos facility to a German customer. The aircraft should be available for worldwide charter from October 2013.