Bombardier will send one of its LearJet 75s to Shanghai in April, to appear in the ABACE 2014 static display. 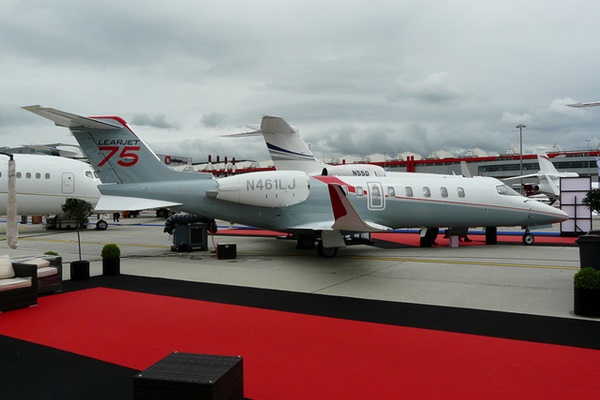 Bombardier displayed this LearJet 75 at EBACE 2013

Bombardier’s new LearJet 75 will appear at the Asian Business Aviation Conference & Exhibition (ABACE) later in the year, marking the first visit of the new $13 million jet to Asia.

Alongside the LearJet 75, Bombardier will also showcase their Challenger 300, Challenger 605 and Global 6000 business jets.

As with the 2013 edition, local operator Hanwa Business Jet Airlines will display one of their Bombardier Challenger 300s, whilst VistaJet, who displayed a Challenger 605 last year, will send a Global 6000 to the static display.

Another local operator displaying an aircraft will be Nanshan Jet, whose solitary Yantai-based Boeing BBJ1 will be relieved of duties for a few days to park up at the show. Boeing will also have one of their BBJ1’s on display, whilst Airbus will be hoping to steal some of its attention by displaying a A318ACJ.

Cessna, who will soon start bolting together business jets in China, will take a reduced offering, with just the Citation Sovereign+ and Citaion XLS+ jet aircraft appearing in the static, although they will be taking a Grand Caravan EX turboprop. The 2012 edition of ABACE saw Cessna release details of it’s joint venture to assemble locally bound aircraft in the region in China, and an update on the progress is expected at this years show.

Dassault will be keen to build on the success of the Falcon 7X in China, and will once again display at the event, showcasing their Falcon 2000LXS and Falcon 7X.

Embraer delivered their first Phenom 300 into China at the beginning of 2014, and may well decide to fly the Inner Mongolia-based aircraft in for the show. The Brazilian airframer will also display their Phenom 100 very light jet, along side it’s larger Legacy 650 and Lineage 1000 offerings.

Gulfstream will once again confirm its intentions in the region by taking its entire in production business jet line-up to Shanghai, from the Gulfstream G150 right the way through to the flagship G650. The G650 was one of the highlights of the show the previous year, and is sure to receive as much attention again in 2014.