Market analysis: Business jet deliveries up in 2013, but only just 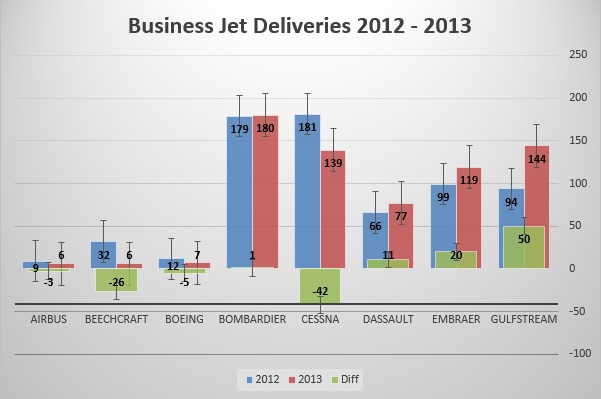 Business jet deliveries increased by a modest 0.9 per cent in 2013 – up from 672 to 678 – according to the General Aviation Manufacturers Association’s (GAMA) annual ‘State of the Industry’ webcast from February 2014.

This is the first time that business jet deliveries have shown a year-on-year increase since 2008.

A strong fourth quarter for most business jet manufacturers helped the industry to deliver six more aircraft in 2013 than in the previous year.

Large gains at Gulfstream – and to a lesser extent, Dassault and Embraer – helped balance out the drop-off in deliveries at Cessna and Hawker.

Dassault was also helped by the new aircraft effect, with the $27.1 million Falcon 2000S delivering nine units in the final quarter of the year, including the first Falcon deliveries to Estonia and Lithuania. A strong fourth quarter for the Falcon 7X, with 17 deliveries, helped the French company post a 14 per cent rise in shipments.

Embraer had one of its strongest fourth quarters on record, delivering 53 aircraft. Over half of these were Phenom 300s, an especially impressive feat given that other manufacturers reported a drop in light jet deliveries.

But the real story over the course of the year was the declines at Cessna and the final jet aircraft leaving the lines at Hawker.

The 23 per cent drop in deliveries at Cessna can largely be attributed to delays with new aircraft certifications, with both the Citation M2 and Citation Sovereign+ only starting deliveries in the last few days of the year. The new Citation X, however, suffered a further setback and as of late February, it still shows no signs of crossing the finishing line.

The first quarter of 2013 saw the final business jet deliveries from Hawker, with six Hawker 4000s leaving the Wichita factory. Acquired by Textron at the end of 2013, Beechcraft will focus solely on turboprop production, ending a 50 year run of Hawker 125 production.

To see how the business jet manufcaturers fared individually, you can read our reports on Bombardier (180 deliveries), Embraer (119) and Gulfstream (144 deliveries).