Ken Cage, private jet repo man and TV star, aims to recover Discovery Channel’s ‘Airplane Repo’ from being cancelled as ratings and claims of the show being fake create an uncertain future.

With their million dollar price tags and spacious cabins, private jets are often seen as the very pinnacle of fine living and luxury. But beyond the champagne and celebrity image portrayed in the media, the private jet industry remains a secretive one.

It is not surprising then, that ‘Airplane Repo,’ a documentary-style television series which gave a rare and candid look behind the scenes of the industry has been so hotly debated by veteran business aviation professionals and casual viewers alike.

Originally commissioned by the Discovery Channel in 2010, ‘Airplane Repo’ closely followed Nick Popovich, a burly business jet bailiff for hire, whose high-risk job has seen him spend a week in Haitian prison cell and narrowly escape a bullet.

After three successful episodes, the show returned for its first full season in July 2013, with a four-man cast – all specialising in different parts of aircraft repossession – replacing Popovich across 10 episodes.

At the helm of the show, Ken Cage, an ex-banker with a security and investigation background, says his clean cut professionalism has meant he’s been able to achieve success without resorting to some of the more guerrilla tactics used by other repossession specialists.

Working from Orlando, but speaking from his Philadelphia home, where he is currently surrounded by four daughters and eight inches of snow, Cage says: “I don’t put myself in those situations. I have short hair, I can pull off a suit and I can carry myself in a different way.”

“A few years back, George Bush came to my home town. I walked through security for two blocks until I was very close to him and nobody stopped me.”

While Cage’s demeanour may have been carved by his experiences at JP Morgan and Chrysler Finance, he is no stranger to the dangers that come with the job, whether that’s being detained in Orlando or being led on high-speed boat chases by crazed Cubans.

The co-founder of the IRG Group recalls with mixed memories an incident where he had been hired to recover three private jets belonging to a Floridian salesman that was “about as dirty and shady as you can get.” Things soon turned sour when Cage was confronted by a drug-addled former NFL footballer who was employed as the owner’s chief pilot.

“When he realised his job was lost if we repossessed the aircraft, he came off the plane and gave one of our guys a two hand shot to the back as hard as he could and sent him flying,” he says. “We had to look him in the eye and half challenge him until he calmed down.”

Two pilots and a bounty hunter

On screen, Cage is often accompanied by Danny Thompson, a tattooed man mountain who spent 13 years as a bounty hunter and could easily be mistaken for a Hell’s Angel. Thompson acts as Cage’s bodyguard and often lends his investigative insight when tracking down an errant aircraft.

Although the pair were introduced by the producers behind ‘Airplane Repo,’ Cage says they “hit it off right away” and Thompson continues to be employed as a contractor for IRG.

ALSO READ: What it’s really like to fly on a private jet

“Danny’s my guy,” says Cage. “Most of what you see is when he’s in protection mode, but he’s one of the nicest guys.”

The rest of the show’s airtime is shared by aviation veteran Kevin Lacey (“one of the best mechanics I have ever seen and a great pilot”), a born and bred Texan, who up until recently, was employed as one of Popovich’s top repo men and Mike Kennedy, an ageing adrenaline junkie, whose consuming curiosity for aviation, is matched only by his fascination for exotics animals (“there’s not a single thing that man can’t fly; I swear if you gave him a paper airplane, he would fly it.”)

Is Airplane Repo fake or real?

Whereas the earlier episodes starring Popovich were credited for their “genuine and realistic” portrayal of aircraft repossession, the heightened drama of the first full season had some viewers claiming that portions of show had been exaggerated and even faked completely.

Cage wastes no time dispelling the conspiracy theories which he claims are nothing more than myths. “First of all, look me up and you will see that I do this for a living,” he says bluntly. “Secondly, it’s a TV show. We film things how they happen, but obviously people don’t want their faces shown. We just cannot show you everything live – it’s not legal, for a start – so certain things have had to be shot again.”

“One thing I often hear people question is how we have the time to fit the airplanes with GoPro cameras,” adds Cage. “You can’t just turn up at an airport and expect to fly away. It’s a 10 or 15 minute process to check the aircraft and while we’re doing that the production team fits the cameras on the aircraft – it takes 45 to 60 seconds.”

What may have troubled the show’s producers more than the fakery claims was Cage’s public admittance that ratings for the most recent episodes of ‘Airplane Repo’ were lower than had been expected, taking to Facebook and Twitter to encourage viewers to “spread the word” and e-mail the network to request another season. 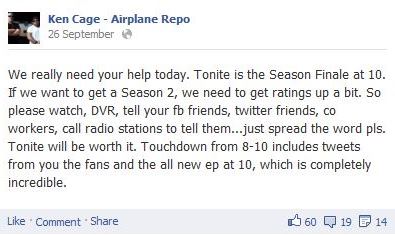 So far, no decision has been made regarding the future of ‘Airplane Repo,’ but the stars of the show remain hopeful.

“Discovery Channel is still in the decision-making process,” says Cage. “We’re supposed to hear from them in the next week or two, but this is TV, so that doesn’t mean anything. We’re really hopeful. Discovery is a great network and we think it’s a great show.”

UPDATE: The second season of ‘Airplane Repo’ premiered on Discovery Channel on 22 August 2014.