Bustling scenes inside the Las Vegas Convention Center on the first day of NBAA 2013.

After a new aircraft launch from Dassault at yesterday’s press day, we can expect a big announcement from Nextant today as Corporate Jet Investor brings you more live coverage from NBAA 2013 in Las Vegas.

Bustling scenes inside the Las Vegas Convention Center on the first day of NBAA 2013.

No matter how hard marketing departments and public relations people try, it is hard to create an optimistic mood at your booth or stand when things are not going well. Last year at NBAA, Beechcraft (in Chapter 11) and HondaJet (which had announced production delays) tried hard to project a positive vibe, but were not particularly successful.

This year, things are completely different. The new refocused Beechcraft is doing well  – even if they are extremely annoyed at the launch of Nextant’s new aircraft, where Nextant will re-manufacture King Air 90s.

The mood at Honda is also completely different. Their programme is now back on track and they are confident that they will be delivering aircraft by early 2015. Yesterday, they also announced that they will be offering financing to US customers. Normally, the thought of an OEM setting up a captive finance division would be worrying, but Honda is such a large company that the risks are much lower.

Here’s another remind that you can subscribe to Corporate Jet Investor’s newsletter by looking for the sign-up box on the home page.

16.00 Birthdays being celebrated at NBAA. Two big birthdays at the show are 50 years since the first Falcon rolled off the assembly line (there is a nice Dassault video here) and the first flight of the Learjet 23 in 1963.

The 50 anniversary of Learjet is also a great excuse to remind you of Bill Lear’s best quotes.

15.40 Before this week’s show, Bruce Dickinson, singer of Iron Maiden was named as non-executive chairman of Aeris Aviation, the European distributor for Eclipse. Today, we asked Bruce to describe the business jet market in one word. We’re not sure either…

14:00 Nextant announce its new re-manufacturing project will be the G90XT, based on the King Air C90 Series. Here’s what our editor Alasdair Whyte had to say about the announcement:

There is an interesting personal dynamic behind Nextant’s new launch. Sean McGeough, president of Nextant, was formerly president of Hawker Beechcraft Europe in the Middle-East and Africa (in fact, he only met Kenn Ricci, head of Directional Capital, at last year’s NBAA) and worked at the company for 12 years.

Beechcraft already sees the Nextant 40Xti as an irritant to its Hawker 400XPR programme with Sierra Industries and senior managers at Beechcraft were not happy when McGeough left for Nextant. Now he is competing in their core market. “I have sold and flown hundreds of Beechcraft aircraft all over the world, so this is an exciting project for me,” says McGeough. “But I won’t be drinking any drinks that former colleagues at Beechcraft offer me this week.”

12.45 We asked Rene Banglesdorf, CEO of Charlie Bravo Aviation, to describe the business jet market in one word:

11:00 Pilatus Aircraft announces its sales and service network for its new PC-24 business jet. The PC-24 also made its NBAA debut at the show this year, after it was launched at EBACE 2013.

9.30 Here’s the wingless mock-up of the HondaJet on display at Las Vegas Convention Centre.

The HondaJet is available in a variety of colours. 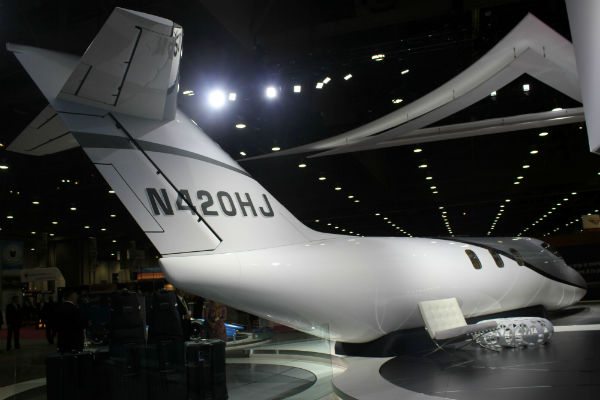 The HondaJet will be able to carry five or six passengers.

“The light jet market is not in a very good condition [but] it is starting to stabilise and we expect a full recovery by 2015.”

Yesterday, Honda announced that it will offer aircraft finance to US customers in partnership with American Honda Finance Corporation and this morning, Fujino hinted that the company plans to roll-out finacing in other regions. He also claimed that he expects to deliver around 80 Hondajets in the aircraft’s first year of service.

Asked whether Honda has started developing a second Hondajet, Fujino chuckled and insisted: “That is confidential.”

9:00 Welcome back to NBAA 2013. It’s a very warm 80 degrees here in Las Vegas. While we’re getting started, we’d suggested recaping on news from yesterday’s press day.