New data from WINGX Advance shows European private charter is down by 2.7% in November 2013. 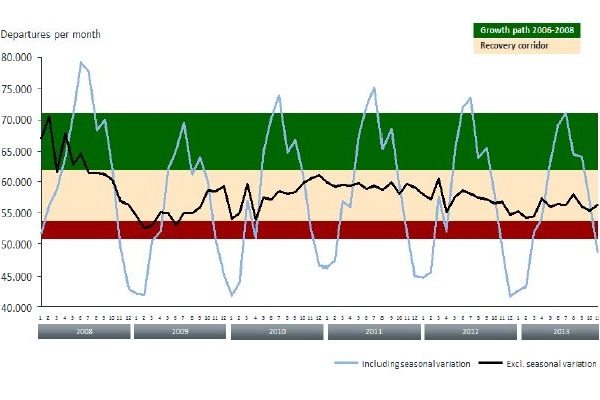 New data from WINGX Advance shows European private charter is down by 2.7% in November 2013.

There were 14 per cent few flights involving private jets and business aircraft in Europe in November 2013, when compared with the previous month, which has slowed down the year-to-date trend to -2.7 per cent.

The reports shows small growth in regions such as Sweden, Benelux, Poland, the Baltics but a significant increase of 27 per cent in Ukraine.

Richard Koe, managing director of WINGX Advance, said there is “still not much positive repercussion for business aviation from the Euro zone’s gradual recovery, but lack of growth does not appear to have affected Ukraine adversely, where activity was 30 per cent up.”

“The unbroken monthly sequence of growth in ultra-long range activity and decline in mid-size flights once again highlights the variability in customer demand,” he added.

The charter market was hit the hardest, with activity declining by 2.7 per cent and particularly sharp declines for corporate airliners, heavy and mid-size jets, as well as piston aircraft and turboprops, despite a year-on-year increase in private and government flights. Charter also picked up for ulta-longe range aircraft and super-mid and very light jets, with Cessna’s XLS private jet, in particular, gaining 11 per cent activity year-on-year.

Most of Europe’s busiest business aviation airports gained activity year-on-year, notably in charter, at five of the top six airports. The fastest growth was experienced in Zhuliany (Ukraine), Ataturk (Turkey) and Northolt (UK), which all saw activity increase by more than 20 per cent year-on-year.