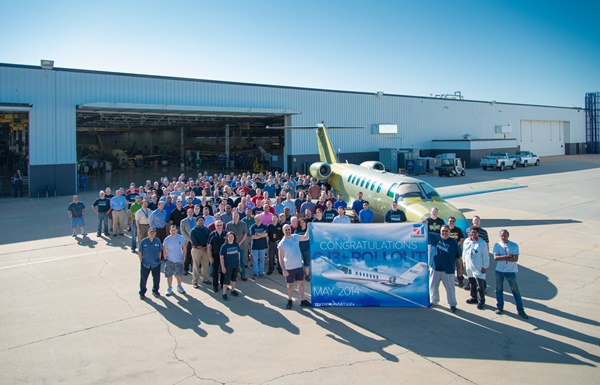 Cessna has completed the construction of the first production Citation CJ3+ business jet, with the aircraft rolling off the production line a little over two months since the new variant was launched.

Cessna announced the $8 million CJ3+ in March 2014, with the aim of getting the aircraft into new owners hands by the end of the year.

Externally, the aircraft is identical to the CJ3 that it replaces, but on the inside, the interior has been completely re-worked.

As well as an all new cabin design, the CJ3+ also features a new cockpit that’s been built around the Garmin G3000 avionics suite.

“Today’s rollout occurred just two months after the announcement of the new CJ3+, showing our strength in investment and certification of new products,” says Chris Hearne, vice president, jets. “We are eager to get the CJ3+ into the hands of customers later this year where they will benefit from the upgraded Garmin G3000 flight deck and incorporation of the latest Citation cabin features.”

Cessna is expecting to certify the CJ3+ during the second half of 2014, with deliveries to customers following shortly afterwards.