Business Aviation lands in Shanghai for the 2019 ABACE 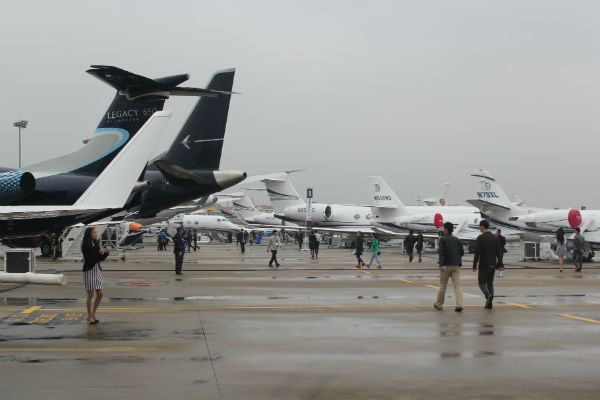 Business jets on display in a rainy Shanghai at ABACE 2014.

Shanghai, China, April 15, 2019 – The latest products, services, equipment and announcements in business aviation for Asia will be in focus for the 2019 edition of the Asian Business Aviation Conference & Exhibition (ABACE2019), coming to Shanghai Hongqiao International Airport, from April 16-18.

“Business aviation” is a term given to describe the manufacture, use and support of mostly small “general aviation” airplanes for business reasons. Given its geographical and other considerations, the Asian region holds enormous potential for business aviation in the coming years. ABACE2019 will feature more than 150 exhibitors and more than 30 aircraft on display, including pistons, intercontinental jets and helicopters.

Their presentation, at 11 a.m. on the show grounds, was augmented by remarks from Jeffrey Lowe, a member of the board of governors for the Asian Business Aviation Association, who provided a 2018 fleet report for the industry in the Asian region. All three speakers took reporters’ questions at this exclusive media briefing.

Following the briefing, a tour of the ABACE aircraft display was provided, with lunch offered thereafter.

The international embrace of business aviation in Asia will be highlighted by the government and industry leaders participating in the show’s April 16 opening keynote session.

Later on the show’s first day, a panel – hosted by the Civil Aviation Administration of China, or CAAC – will focus on the development of airports and other infrastructure.

The show’s second day will start with a session dedicated to the development of Urban Air Mobility in Asia, will include: Cyrus Sigari, co-founder of jetAviva; Shane Tedjarati, president, global high-growth regions, Honeywell, and; Tian Yu, CEO of AutoFlightX.

NBAA’s Bolen commented, “As in past years, China will take its place on the stage at the center of the business aviation universe for ABACE. There will be much that is new and exciting about the show, and, working with the SAA, CAAC and AsBAA, we know ABACE will be a huge success.”

Lu Xun, Chairman, Shanghai Hawker Pacific Business Aviation Service Centre, said, “At present, the focus of the domestic business aviation industry has gradually shifted from the industrial breakthrough to the common prosperity of the entire industrial chain, which will bring new opportunities to the development of business aviation industry in Shanghai and Greater China. We are dedicated to continuous effort in enhancing our quality of service in business aviation, and in return to complement the business operation environment in Shanghai. We aim to enhance the service offerings to the city as an aviation hub and enhance the position of Shanghai’s infrastructure as an international city.”